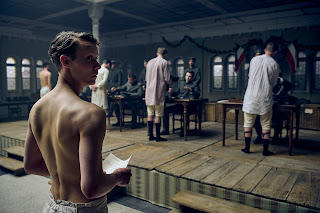 All Quiet on the Western Front (c) Netflix

Here is the last prediction article for 2022. I will do one more before the nominations are announced on January 24, 2023 including who I would nominate if I had a ballot. Also, I will stick with gut to say that Colin Farrell and Brendan Gleason will both be nominated for Best Actor although Gleason is being campaigned for Supporting Actor.  Enjoy.

Film: The New Documentary, “Broadway Rising,” About Broadway and the Pandemic Shutdown, Reflects on How Lives Have Changed For Theater Workers and Theatergoers 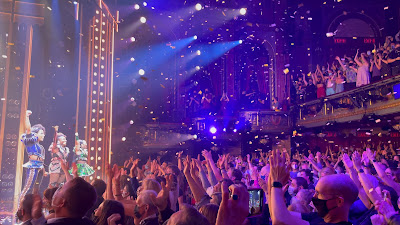 This is not going to be the usual The Interested Bystander review. This review website was born out of the Covid pandemic when Broadway and other New York theaters were starting to reopen. I debated if I should narrow my focus to just films (I have been writing about film at Film Score Monthly magazine since 2000) or just theater (I moved to New York to be a playwright and have served on many award bodies in my career), but I ultimately decided to do both. Since launching over a year ago, I have sometimes regretted this decision as there have been weeks in which I couldn’t give several shows or films the proper coverage. I am just one of a two-man team, the other being my editor (whose only reward is maybe a couple off-Broadway shows a month with the occasional well-deserved dinner maybe twice a year). But as one of the few Asian critics in either medium, I thought I would at least try to do both, at least at the start. Now, over a year later, since the start of my endeavor, comes a wonderful new documentary film,

Imagine the extravagance of the best parts of “La La Land” and the laser-focus intensity of “Whiplash” and you get the last two hours of “Babylon,” Damien Chazelle’s excessive and manic look back at the early days of Hollywood. How about the first hour you may ask (and yes, the movie is a smidge over three hours)? Well, there is absolutely no prescient for the cocaine-fuel party that starts the movie with long tracking shots, gratuitous nudity and projectile bodily fluids from every orifice of man and beast (the beast one starts the movie on a high or low note, depending on your tolerance). It makes Baz Luhrmann’s frenzied “Moulin Rouge” and latest “Elvis” look quaint. Our sherpa to all this excessiveness is Manny (newcomer Diego Calva), a Mexican American worker at this party, who like everyone else, wants to break into showbiz. He meets two important people on this fateful night: big movie star Jack Conrad (Brad Pitt), who seems nonplussed about the chaos around him, and Nellie LaRoy (Margot Robbie), a hyper-ambitious aspiring actress who hopes to crash the party. When the night is over, Manny has been hired to be Jack’s assistant and has fallen madly in love with Nellie, who by some crazy happenstance does get cast in a movie as the sun begins to rise over the remains of the party. The movie never again reaches the height of that hour, and yet Chazelle keeps coming up with frenetic scenarios for these three to get into in the middle section, which focuses on the magic and madness of moviemaking in the silent era of the 1930s. The final act takes its cue from “Singing in the Rain” as we see the fallout at the start of talkies.

Email ThisBlogThis!Share to TwitterShare to FacebookShare to Pinterest
Labels: Film

Theater Review: This Broadway-Bound Sondheim Musical Has Rarely Rolled Along “Merrily” Since Its Initial Failure

Theater: Merrily We Roll Along
At New York Theatre Workshop

Premise: Steven Sondheim was on a roll (if ever there was an understatement) in the 1970s with iconic or artistically daring musicals like “Company,” “Follies” and “Pacific Overtures” before culminating with his operatic masterpiece “Sweeney Todd”–when critics and audiences rebelled in 1981 when there was even a whiff of trouble with “Merrily We Roll Along.” Based on the Moss Hart play, Sondheim and book-writer George Furth musicalized the death knell of a 20-year friendship at the start the show and then goes chronologically backwards in time to find out how it all started. Frank (Jonathan Groff) is a successful movie producer at the premiere of his latest hit, unhappily married to his second wife, Broadway star Gussie (Krystal Joy Brown). Mary (Lindsey Mendez) is a frustrated and alcoholic writer with the specter of her first successful novel hovering over her next. And Charley is a newly minted Pulitzer Prize-winning playwright, but only after severing his musical writing partnership and frustrating friendship with Frank a few years earlier by embarrassing him on live TV with one of Sondheim’s best and most acerbic songs, “Franklin Sheppard, Inc.” As the show progresses, we see some earlier milestone moments–the opening night of Frank and Charley’s big Broadway musical (and eventual movie adaptation), how Frank met and alienated his first wife Beth (Katie Rose Clarke) and in the stirring finale, how the friends met, bonding over the wonders of the space race, stirring optimistic feelings for the recently graduated trio.

Email ThisBlogThis!Share to TwitterShare to FacebookShare to Pinterest
Labels: Off-Broadway 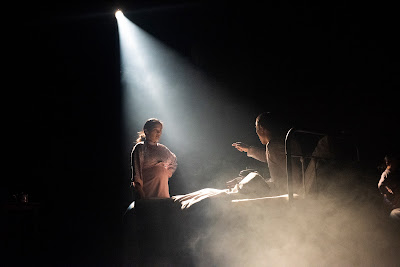 Playwright Lloyd Suh has essentially written a companion piece to last season’s historical drama “The Chinese Lady” with “The Far Country,” which could be subtitled “The Chinese Gentleman.” Like his earlier play, “The Far Country” starts soon after the turn of the century, this time in San Francisco, when Chinese men who live in America are scrutinized by US Immigration, especially after the Great Earthquake of 1906, when official records have been destroyed. So it is with Gee (Jinn S. Kim), who, in order to leave the country to visit his wife and children in China, needs to prove he was born in the US. But his personal records were also destroyed, which makes things difficult under the specter of the 1882 Chinese Exclusion Act. The story then switches a few years later to Moon Gyet (Eric Yang), a young man in rural China whose mother (Amy Kim Waschke) wants him to have a better life in America, but will essentially doom him to servitude as well as debt to Chinese gangsters for a down payment to set everything in motion. Moon’s tortuous story on Angel Island (the Bay Area’s Ellis Island, which doubled as a detention center), where he is supposed to spew minute facts (like how many steps did the entrance to his high school have), is the most harrowing section in Suh’s play. Finally, we follow Yuen (Shannon Tyo) and her efforts to marry her way to citizenship with the same awful terms that Moon had to accept. Suh is effective in showing us the bureaucratic red tape and the many interviews Chinese men had to endure because of the embedded racism in US laws. The repetition of these scenes, which may be realistic in its depiction, is, in the theater, not as dramatic as Suh probably means it to be. But overall, the play is quite stirring and emotional, although Suh does opt for a quiet ending when more anger could have been elicited. All the actors are first rate in Eric Ting's production, but again, like in her Theater Award-winning debut in “The Chinese Lady,” Shannon Tyo stands out as the strong-willed Yuen. Special mention has to be given to Clint Ramos’ set, which seems simple at first, but with Jiyoun Chang's dramatic lighting, gives us some memorable and hidden stage images.

Reviews: Holiday Offerings Include a Nostalgic “A Child's Christmas in Wales” at the Irish Rep and a Bittersweet “Empire of Light” in Cinemas, as Well as Other Yuletide Suggestions

Theater: A Child's Christmas in Wales
At the Irish Repertory Theater

This is the sixth time in Irish Repertory Theatre’s history that they have presented Charlotte Moore’s adaptation of poet Dylan Thomas’ 1945 “A Child’s Christmas in Wales,” a concert of Christmas songs by a company of six actors as they recite and act out his short story. I had seen the 2018 incarnation with Nicholas Barasch (so wonderful this season in the unsettling “The Butcher Boy” on the same stage) as the Thomas stand-in. This time we get Dan Macke (an understudy in “The Butcher Boy”) stepping in and he is equally ingratiating and winning in an “aw, gosh” kind of way, as he narrates his family traditions on a typical Christmas in Wales in the 1920s. The rest of the cast play multiple characters from this memory monologue, including Dylan’s parents, friends and many relatives. It is a corny, bear hug of show, with the majority of the runtime devoted to Christmas carols of yore. Repurposing the shell of the Penn Station set from “Chester Bailey,” now filled with Christmas trees and decoration as well as a piano serving as the show’s sole musical accompaniment (well, there are…whoops, no spoilers here and don't look at the picture), the ensemble unironically fills the theater with a warmth and sincerity that any unjaded New Yorker will embrace. The talented, colorblind cast includes Kerry Conte, Jay Aubrey Jones, Kylie Kuioka, and Ashley Robinson. Even if you think you’re allergic to the old-fashioned prose and optimistic point-of-view, it is certainly a welcome tonic to the generic and recycled holiday tales from Hallmark and Lifetime. A perfect seasonal outing for the whole family.

Film Reviews: Gay Romance “Spoiler Alert?” You Will Cry. “Lady Chatterley’s Lover” Is a Fine Adaptation. “She Said” Takes on Harvey Weinstein to Dispute What He Said. 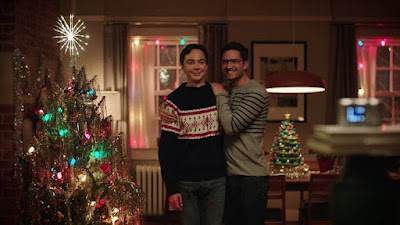 “Spoiler Alert” is the third major film to focus on the gay relationships this year, along with “Fire Island” and “Bros,” and it’s interesting to note that the only thing the three movies have in common is Kylie Minogue. Fair. Where the other two films seem to want to highlight some social justice issues along with its slice of gay life, “Spoiler Alert” mainly focuses on the romance of Michael and Kit (yes, very “Knight Rider”) and their 14-year life together before, spoiler alert, Kit dies of cancer. Before then, Michael (Jim Parsons), a writer at TV Guide, and Kit (Ben Aldridge), a graphic designer, seem like the perfect New York couple at the start, despite Michael’s body insecurities and Kit still being in the closet to his parents (Sally Field and Bill Irwin). Although “Spoiler Alert” warns its audience at the get-go, when the Big C diagnosis finally does happen, and the tone of the film changes into the film we all knew it would be, it still manages to tug on the heartstrings, thanks to the performances by Aldridge and, particularly, Parsons. Although he doesn’t completely shed his idiosyncratic mannerisms after ten years of “The Big Bang Theory,” Michael is a bit less uptight than Sheldon and more emotionally effusive. Their relationship starts cute, then before you can say calendar montage, they are already at the couples therapy stage of their lives, which is a bit jarring. The film is the perfect combo of the old and new Lifetime Channel film: the weepy disease of the week and the Christmas love story (just in case you were wondering why this is being released during the holidays, Christmas plays an important part in the plot). Director Michael Showalter, who directed the similarly themed and plotted “The Big Sick,” again shows how he can successfully balance comedy and drama while dealing with illness. Based on the true story and book by Michael Ausiello, the movie feels very authentic, even when dealing with the familiar tropes the film fully embraces (“Terms of Endearment” is name-checked). “Spoiler Alert” may not be the most elegant title for a love story, but it doesn’t lie.