Imagine the extravagance of the best parts of “La La Land” and the laser-focus intensity of “Whiplash” and you get the last two hours of “Babylon,” Damien Chazelle’s excessive and manic look back at the early days of Hollywood. How about the first hour you may ask (and yes, the movie is a smidge over three hours)? Well, there is absolutely no prescient for the cocaine-fuel party that starts the movie with long tracking shots, gratuitous nudity and projectile bodily fluids from every orifice of man and beast (the beast one starts the movie on a high or low note, depending on your tolerance). It makes Baz Luhrmann’s frenzied “Moulin Rouge” and latest “Elvis” look quaint. Our sherpa to all this excessiveness is Manny (newcomer Diego Calva), a Mexican American worker at this party, who like everyone else, wants to break into showbiz. He meets two important people on this fateful night: big movie star Jack Conrad (Brad Pitt), who seems nonplussed about the chaos around him, and Nellie LaRoy (Margot Robbie), a hyper-ambitious aspiring actress who hopes to crash the party. When the night is over, Manny has been hired to be Jack’s assistant and has fallen madly in love with Nellie, who by some crazy happenstance does get cast in a movie as the sun begins to rise over the remains of the party. The movie never again reaches the height of that hour, and yet Chazelle keeps coming up with frenetic scenarios for these three to get into in the middle section, which focuses on the magic and madness of moviemaking in the silent era of the 1930s. The final act takes its cue from “Singing in the Rain” as we see the fallout at the start of talkies. 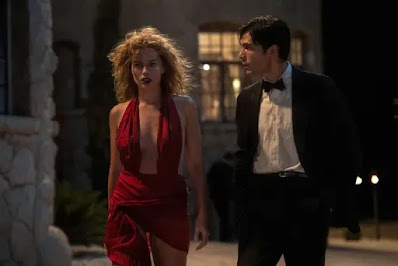 As much as I love the energy and ambition of “Babylon” (a good chunk of the last half hour involves a descent into hell with Tobey Maguire’s wackadoo character), the script is littered with uninteresting showbiz cliches whenever it takes time to actually deal with the characters and motivations. Manny, however charismatically played by Calva, doesn’t seem to have much of a backstory. Robbie’s Tasmanian Devil approach to Nellie is admirable but exhausting after a while. Only Pitt invokes any sympathy, although Jack’s fall from favor in Hollywood feels more like a footnote to counterpoint the ascent of the other two characters. There is no doubt the film overflows with creativity and ambition, particularly Linus Sandgren’s dizzyingly cinematography and Justin Hurwitz’s kinetic score, which recycled some of “La La Land’s” musical themes, maybe to connect the dots between this movie and the hopeful actors of Chazelle’s Oscar-winning earlier film. Your enjoyment of the film may vary, but not your admiration of Chazelle’s directorial chutzpah. 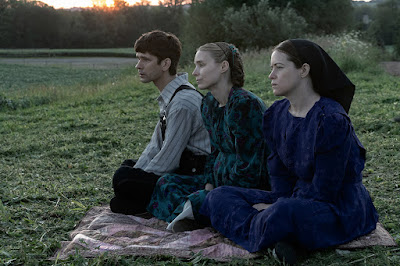 Certainly director Sarah Polley’s “Women Talking” fulfills its title’s promise and then some, and you might think, how dramatic could this all even be. Well, if you consider the topic of discussion is their own safety from widespread sexual abuse, then you can see how vital this talk is for these women in a cloistered Mennonite-line community. After one of the men in the community is arrested (in a rare breach from the outside world) for drugging and raping a young girl, the male leaders of this religious sect has given the women a day to decide if they will leave, stay and confront the men head on or leave things as they were. The problem is that only the last option will assure that the women’s soul will enter the kingdom of heaven, as their patriarchal religion has ordained that women always obey their husbands. The talk is mainly a debate between the women on all sides of the decision, and with the powerful talents of an actress ensemble that includes Rooney Mara, Claire Foy, Jessie Buckley and Frances McDormand (in a very small role), the film is both fascinating and maddening. Ben Whishaw plays the sympathetic and gentle August, the only male allowed in the meeting as none of the women can write to take the minutes. There has been some debate about cinematographer Luc Montpellier’s washed-out sepia tone palette, but I found it appropriately stark, with Hildur Guðnadóttir’s score balancing things out with some softer melodic edges. Of the actors, Buckley and Mara have the most to do, although it’s great to see veteran actress Judith Ivey as one of the sensible elder voices. But it’s no doubt that the real star of the film is director and screenwriter Polley, who adapted Miriam Toews’ novel and balances out the urgent talk with beautiful scenes of the innocent farm life of the women and their children, as a reminder of what they are giving up. To us, the decision may be obvious, but Polley gives us many viewpoints to make the film engrossing and yes, even enjoyable.

Film: Glass Onion: A Knives Out Mystery
Streaming on Netflix

Detective Benoit Blanc (Daniel Craig) is frustrated. After solving many mysteries, including the celebrated murder of mystery novelist Harlan Thrombey at the center of the 2019 “Knives Out,” Covid isolation is taking its toll on his overactive brain. So he is overjoyed to get an invite to the private island of self-centered, rich tech bro Miles Bron (Edward Norton), who is hosting a murder mystery weekend with his small circle of influential friends: Claire (Kathryn Hahn), the governor of Connecticut; Andi (Janelle Monáe), his former business partner; Lionel (Leslie Odom, Jr.), a scientist; Birdie (Kate Hudson), a fashion designer influencer and Duke (Dave Bautista), a YouTuber whose goal is to reclaim men’s rights in this PC age. And that’s about all I am willing to tell you, except that like the first movie, writer director Rian Johnson has fashioned another ingenious puzzle box of plot that again tries to skewer the rich and the rich adjacent. Some moments may feel a bit out of place, but rest assured Johnson will most likely round back to that scene later in the movie from another person’s perspective. This is all wildly enjoyable on first watch, but I think it might all feel a bit manipulative on subsequent viewings. Craig’s acting was pretty broad when we were first introduced to him, but he is positively bursting at the seams in this latest installment, thankfully, without ever breaking into indulgence. And a seemingly throwaway singing of a Sondheim song in “Knives Out” pays off with inspired dividends in this sequel. In fact, the name drops (my favorite involves Philip Glass) and celebrity cameos enjoyably tickles the funny bone. And yet the film feels rather empty at the end, maybe because the more-than-talented cast isn’t really playing characters as they are types. The only exception is Monáe, who gets more of a backstory than the others. Yet despite being an empty calorie (although admittingly tasty) trifle, the fun and funny moments outweigh the need for deeper meaning.