Theater Review: This Broadway-Bound Sondheim Musical Has Rarely Rolled Along “Merrily” Since Its Initial Failure

Theater: Merrily We Roll Along
At New York Theatre Workshop

Premise: Steven Sondheim was on a roll (if ever there was an understatement) in the 1970s with iconic or artistically daring musicals like “Company,” “Follies” and “Pacific Overtures” before culminating with his operatic masterpiece “Sweeney Todd”–when critics and audiences rebelled in 1981 when there was even a whiff of trouble with “Merrily We Roll Along.” Based on the Moss Hart play, Sondheim and book-writer George Furth musicalized the death knell of a 20-year friendship at the start the show and then goes chronologically backwards in time to find out how it all started. Frank (Jonathan Groff) is a successful movie producer at the premiere of his latest hit, unhappily married to his second wife, Broadway star Gussie (Krystal Joy Brown). Mary (Lindsey Mendez) is a frustrated and alcoholic writer with the specter of her first successful novel hovering over her next. And Charley is a newly minted Pulitzer Prize-winning playwright, but only after severing his musical writing partnership and frustrating friendship with Frank a few years earlier by embarrassing him on live TV with one of Sondheim’s best and most acerbic songs, “Franklin Sheppard, Inc.” As the show progresses, we see some earlier milestone moments–the opening night of Frank and Charley’s big Broadway musical (and eventual movie adaptation), how Frank met and alienated his first wife Beth (Katie Rose Clarke) and in the stirring finale, how the friends met, bonding over the wonders of the space race, stirring optimistic feelings for the recently graduated trio. 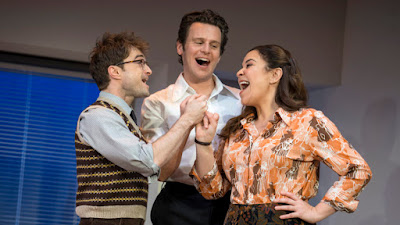 My Take: The main problem I have with “Merrily” is the same I have for “Into the Woods.” One great act, one ambitious but flawed other act. Only in this musical, the order is flipped– the second act is the far more entertaining and relatable than the first, which, while filled with great songs, is mostly vile people acting vilely toward each other. Nothing in Maria Friedman’s production (first seen at the Menier Chocolate Factory with a different cast) made a case for the show, beyond the wonderful songs like “Not a Day Goes By” and “Old Friends.” I found Radcliffe’s Charley the most successful of the cast as Charley seems to be the one who sticks to his goals as a writer and never wavers from it. Tony Award-winner Mendez, although appealing, never finds a way to make her thinly drawn Mary believable as a failed drunk writer and how she became that way, especially since her only role, whenever things get tense between Charley and Frank, is to pull out her pinky finger (as in pinky swear we’ll always be friends). Groff is sort of in the middle, less successful when he’s being unbearably douchey (he gives a mean, constipated scowl), but of course charming and ingratiating as the younger, more optimistic artist. The other characters who crisscross each other throughout the story are played very broadly but sung beautifully. The ensemble is referred to as the blob, and here the description is never more apt as they ooze in and out of scenes, mugging when they play the smaller parts (Beth’s disapproving parents are played as if they were the Southern couple from “Sunday in the Park with George”). With this all-star cast, a Broadway transfer was inevitable. Still, despite my misgivings, I have no doubt it would be a success next fall, 42 years after its troubled premiere.

VIP: When it was first announced that Daniel Radcliffe would be in this production, I just assumed that he would play Franklin Sheppard, because why would Radcliffe do his first off-Broadway musical and take essentially a supporting part (admittingly, the biggest supporting part). He is perfect as Charlie, and gets to perform the crowd-pleasing, tongue-twister of the musical (along the same lines of “Getting Married Today” and “Sunday in the Park with George”). That he sort of fades in the background after that is a testament to Radcliffe who thankfully believes there are no small parts. After his run as Harry Potter in the movies, Radcliffe has always chosen untraditional and quirky roles in both films and theater, and I can’t wait to see what he chooses next.