Theater Reviews: The Enjoyable, New Musicals, “Titaníque” and “Between the Line,” Have Their Heroines Transplanted Into Other People’s Stories 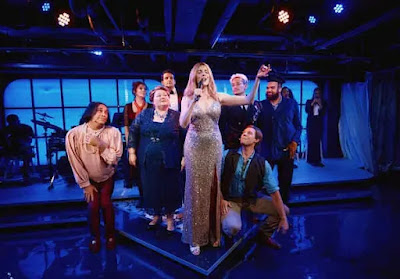 What may seem like a parody whose timing missed the boat, “Titaníque” proved me wrong. This goofy and campy musical, made more fun if you take advantage of the bars in the small basement of the Asylum Theater, is indeed based on the 1997 James Cameron movie but hijacked by Celine Dion (Marla Mindelle) with this jukebox musical filled with her blandly catchy if overearnest songbook (however after all is said and done, “My Heart Will Go On” will be the only tune that’ll lodge in your brain as if it was 1997 again). Dion insists she was on the ship of dreams (even though the event happened over a century ago) and begins to narrate and incorporate herself in the romance of the upper-class Rose (Alex Ellis) with her lower-deck paramour Jack (Constantine Rousouli). And while both actors are fine, trying their darndest to keep their story on track, they are consistently upstaged by the rest of the talented cast playing every other role. Frankie Grande plays a manic Victor Garber (named for the actor who plays the architect in the movie), who would rather “Drive All Night” than listen to the warnings of icebergs (Alejo Vietti’s creatively amusing costume for Jaye Alexander, who plays the frozen “accident-in-waiting” is maybe the best representation of this character, second only to Bowen Yang in the famous SNL sketch). Ryan Duncan is hysterically severe as Rose’s mother, while Kathy Deitch as Molly Brown ties with John Riddle, who plays Rose’s greasy fiancée, as the show’s two unsinkable vocal belters. And then there’s Mindelle, who co-created the show with Constantine Rousouli and director Tye Blue. She must know she does a spot-on Celine Dion with her self-serious mannerisms and the Canadian-Frenchness of it all. But in certain angles, she also resembles former first daughter, Ivanka Trump. So, after what will probably be a healthy run in “Titanique,” Mindelle might consider her next show, “Insurrectíque.” 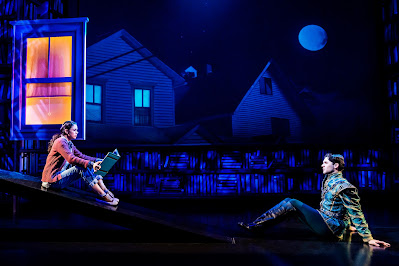 Between the Line (c) Matthew Murphy

Theater Review: Between the Lines
At The Tony Kiser Theater

Never underestimate the draw of musicals targeting pre-teen girls (and ageless gay men) with such big Broadway hits as “Wicked” and “Frozen” (which probably would have kept running were it not for the pandemic). So, even though attempts like “Anastasia” and “The Little Mermaid” didn’t fulfill their promise, this forever fanbase with its love of merchandising is too lucrative to not tap into if you have the right project. The current attempt, “Between the Lines,” based on a popular YA novel by Jodi Picoult and her daughter Samantha van Leer, is starting its life off-Broadway. The musical focuses on Delilah (“Aladdin’s” Arielle Jacobs), who’s finding it hard to fit into her new high school after the divorce of her parents. A self-described nerd, Delilah finds her salvation in a children’s fairytale book the musical is named after, in which she has an unusually strong bond with the hero, the handsome Prince Oliver (Jake David Smith) with requisite nobility and dimples. So, imagine her surprise when the Prince starts talking to her through the book and she finds a friend she’s sorely missing in school. And before you can say “The Wizard of Oz,” Delilah finds herself in Oliver’s colorful, fairytale world. The cartoony nature of the book is where the musical shines, and while we get a couple of glimpses of the world in Act One, we don’t get the full joy of it until Act Two. Until then, Timothy Allen McDonald’s book is a pretty rote high school drama similar to the many Netflix series of this ilk, although the actors who play characters in both realms (“and you were there, and you were there…”) are fully committed. Especially good are TV actress Vicky Lewis as, among other characters, a librarian and a mermaid, and Will Burton as a dim high school jock and a dog (hey, it works). The songs by Elyssa Samsel and Kate Anderson have a pleasant pop sensibility with some nice earworms mixed with some ballads that are occasionally a bit too earnest. But, Jacobs and Smith are wonderful leads with lovely voices and comic timing, and they, with the rest of the cast, make the show worth catching.

As I am also part of the theater community in addition to being a reviewer, I will occasionally see a show that a friend or acquaintance has worked on. I believe I can be impartial in my assessment, but now in full disclosure, you know.