Theater Reviews: “To My Girls” and “Take Me Out” Look at Modern Gay Life: One as a Life Lived and One as a Symbol for the Other 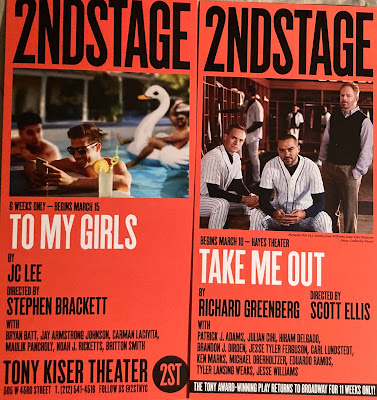 To My Girls / Take Me Out (c) Second Stage promos

Review: Take Me Out
On Broadway at the Hayes Theater (Second Stage)

Review: To My Girls
At Second Stage (closed)

Premise: The estimable Second Stage company has devoted their spring slate to two gay plays, and both are as different from each other as the many colors of the rainbow flag. “Take Me Out” is a revival of the Tony Award-winning and Pulitzer-nominated Richard Greenberg play about a New York City baseball hero who comes out in the middle of a winning 2002 season. “To My Girls” is written by JC Lee and is very much in the present day about a group of friends who, after the worst of the pandemic, rents an Airbnb in Palm Springs for a weekend of fun. Curtis (Jay Armstrong Johnson) is the de facto leader of the group and ultimately the catalyst for much of the drama. His best friend is Castor (Maulik Pancholy), who suffers from low self-esteem (he’s still a writer with a low-paying barista job) and has always had a crush on Curtis. Their New York friend Leo (Britton Smith) is flying in for the weekend and is an Instagram influencer gay. Looking in on this insular, thirtysomething, queer milieu from the outside is Bernie (Bryan Blatt), the older gay owner of the Airbnb. In “Take Me Out,” that role is filled by Mason Marzac (Jesse Tyler Ferguson), an older gay accountant who discovers the joys of baseball when he takes over the finances of Darren Lemming (a fine if underpowered Jesse Williams), the bi-racial phenom (think Derek Jeter in his prime) who casually mentions in a press conference that he is gay. He does so not because he’s in a relationship or fear of being outed, but he just wants to live his truth. He mostly gets, at least in public, support from his teammates including his best friend Kippy (Patrick J. Adams) but morale starts to wane, and it all comes to a head when Shane Mungitt (Michael Oberholtzer), a hotshot relief pitcher, is called up from the minors and immediately starts to rile the big city team with his low-class and Southern attitudes. 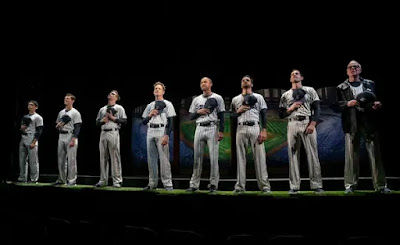 Take Me Out (c) Joan Marcus

My Take: It’s interesting that Second Stage has chosen these two plays to run concurrently at this time, after the pandemic shutdown of New York theater, when gay male plays are in short supply. Both are well produced and ultimately thoughtful plays, but both also feel a bit gerrymandered to reach each of the plays’ ultimate themes. While I loved the original “Take Me Out” when it premiered at the Public in 2002, I was a bit more critical of the actual events of the. The triumph of the first production was Denis O’Hare as Mason and his infectious pleasure of finding happiness in baseball. And while Ferguson is quite good and funny in the role, Mason seems less of a focus this time around, as if his outlook is almost a footnote to the action, which is a shame because his role as the audience surrogate into the rarefied world of Major League Baseball is crucial. Now that the majority of the play falls on the shoulder of the play’s second narrator, Kippy (Adams, always easygoing), the actual plot of play comes to the fore much earlier and feels more artificial this time around. Yes, being gay in a professional sport is still rare, so there is a truth to Greenberg’s thesis that even a popular player like Lemming would get pushback from players and the organization. But when Mungett (Greenberg does have a way with names) arrives and is not only homophobic but racist, one wonders why the Hispanic, Asian and other black players are not drawn more into the fray. And does the team not have a publicist and was Mungett not vetted by the team’s scouts to give a bit of heads-up? Even less successful is the character of Davey (Brandon J. Dirden), Lemming’s old friend who plays for an opposing team. Their confrontation and aftermath in Act Two feel particularly written and not realistically lived in. As much as Lemming remains an enigma throughout, it is no fault of Williams whose performance is equal part cocky and sympathetic. There’s a lot to still enjoy in “Take Me Out,” especially Greenberg’s humor, but the plot machinations did unfortunately take me out. 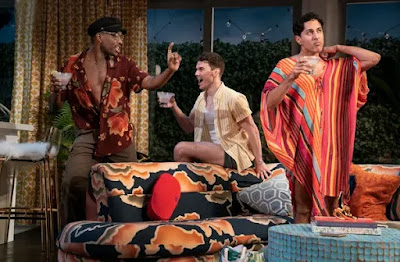 To My Girls (c) Joan Marcus

“To My Girls” is equally funny, with enough one-liners to sate any audience looking for a breezy comedy. It’s less successful when the drama kicks in, as if JC Lee felt the need to seriously examine gay life in the same vein, as say “The Boys in the Band,” ”Love, Valour, Compassion” and even the recent Tony-winning Best Play, “The Inheritance.” The friends on display here are a subset of gays well-versed in pop culture, overusing the word “iconic” until it loses its meaning and obsessed with social media and the celebrity status it affords. The major action that gives the plays its arc is when Castor brings home a cute younger guy from the bar, Omar (Noah J. Ricketts), and how Curtis deals with this. While the performances are pitched in that gay whistle, “gurl” high range, they do become nuanced as the play goes along. It’s only when the confrontations start and secrets are revealed that the play drags (some pun intended). A lot is dumped on Curtis’ lap, and even with Armstrong’s agreeable performance, one wonders why anyone would stay friends with him. Pancholy as Castor, on the other hand, always seem to be on the verge of a hysterical breakdown, although he does usually get the best of comic zingers. And Batt as the owner of the house has the most interesting secret that should be explored more deeply than just the series of bitchy (although totally deserved) comments by the other characters. And while I would always choose drama over sentimental sincerity, the moment that gives the play its title feels so honest that maybe JC Lee should have given his characters their dues before tearing them down. 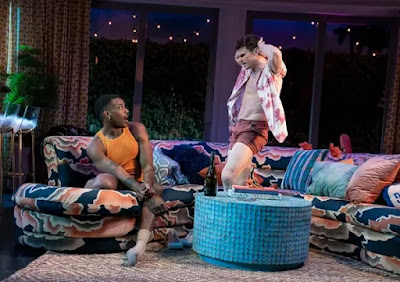 To My Girls (c) Joan Marcus
VIP: “To My Girls:” Britton Smith. Leo is the voice of reason in the play, and Smith’s performance straddles the humor and drama believably. His entrance alone steals the plays, and one wishes he was the focus of the play. Not unlike Belize in “Angels in America,” Leo has both empathy and anger, and Smith is a joy to watch as he displays both. That Smith is also a member of a successful funk band and is an adjunct law professor at Columbia shouldn’t have surprised me one bit. I look forward to his next stage appearance. 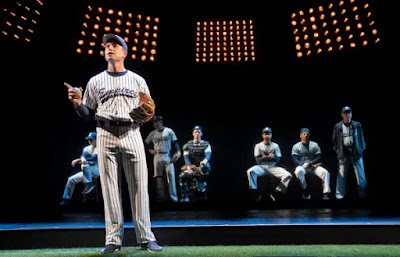 Take Me Out (c) Joan Marcus

VIP: “Take Me Out:” Patrick J. Adams. In the original production, Kippy was the second and more unreliable narrator of the two in this play. But now, under Scott Ellis’s direction, his story feels more central to the production and a lot can be traced back to Adams’ likeable and inviting performance. I was most familiar with Adams in the TV series version of “The Right Stuff” where he played straight-laced John Glenn. He carried that charm over to his Broadway debut. Kippy is the peacekeeper and problem solver of the team, but where his character winds up at the end of the play was fine when he was more of a minor character. In this production, I wish Kippy’s story had more of a resolution. Credit goes to Adams, who, to quote another major Broadway show about baseball (“Damn Yankees”), has “miles and miles and miles of heart.”