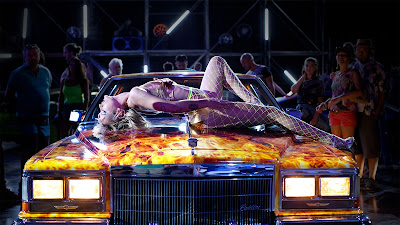 One of the most visually stunning and disgusting movies of the year certainly grabbed headlines when it won the Palm d’Or at the Cannes Film Festival. “Titane,” Julia Ducournau’s second feature (after 2016’s “Raw”), is daring and not like anything you’ve ever seen. But it begs the question, is explicit body horror in film just a way to distract you that there isn’t much of a story. Ducournau has found a willing and daring participant in Agathe Rousselle, who plays Alexia, a woman who has a titanium plate in her head after a car crash injury when she was a kid. This may explain her obsession with cars and why, as an adult, she works as a model, dancing and writhing on cars at car shows. And yes, she does, in between being a serial killer, have sex with one car (to be fair, it is the sexiest cinematic car since “Christine”). But, why this car and why at this moment in her life? How has Alexis survived up to now if her life is always ramped up to 10? Ducournau doesn’t give us answers as much as clues that don’t add up. The movie does calm down in the second half as Alexia meets Vincent (Vincent Lindon), the most sympathetic character of the film. The shift in story is welcomed (no spoilers here) but is Alexis now no longer fixated on cars or murder? Or is it just convenient for what little plot there is? A lot of “Titane” doesn’t make much sense, but again, is your brain registering anything besides the crazy visuals on display? I’m sure the answer may become apparent after another viewing, but like a lot of early David Cronenberg or David Lynch films, I don’t ever need to see “Titane” again. 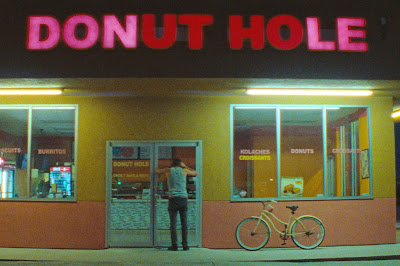 Sean Baker’s follow-up to “The Florida Project” is again another look at a community invisible to most of us. Like the denizens who live in the hotels near Walt Disney World in Orlando, these small-town Texans are trying to get by with their modest means when local boy Mikey Davies (90’s MTV VJ Simon Rex), a charming but toxic ex-porn star, returns to wreak havoc on people he knows, like the wife (Bree Elrod) he never divorced, and those he gets to know, like the teen donut shop employee Strawberry (a wonderful Suzanna Son) he takes an interest in. The movie follows Mikey as he tries to get a job (no one is willing to hire “Mikey Saber,” regardless of the number of views on his porn website), finally gets a job (not of the legal variety) and saves money for his eventual comeback. We know this will not end well for him, but it’s fun to watch this loser try to charm his way in and out of troubling situations. Still, the ending feels more poetic than realistic, and even though it was eventual, it wasn’t surprising. I did like the actual last shot of the movie, which felt more natural and less judgy on Baker’s part. But, like most porn movies, the excitement of the situation will unfortunately and ultimately deflate. 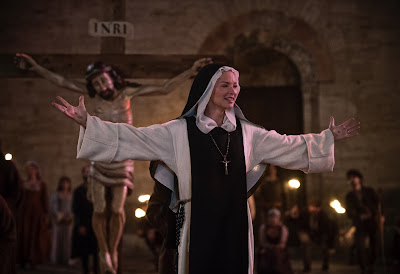 You can’t get a more salacious movie plot than a lesbian nun with stigmata. And for it to be based on a true story and directed by “Showgirls” director Paul Verhoeven, you can understand why there were protestors outside Alice Tully Hall, albeit there were only three at most when I saw them. Verhoeven was most likely disappointed by that turnout since controversy breeds curiosity, and while I believe the Catholic Church does have a problem with free speech, they might have a point with “Benedetta.” At the start of the film, the title character, played by Virginie Efira, who is a dead ringer for a young Kim Cattrell, is a child who believes she has a direct line of conversation with Jesus. She joins a convent in Tuscany (it’s the 17th Century), run by the film’s MVP, Charlotte Rampling, and although Benedetta has bouts of occasional, unexplained bodily umm, abnormalities, she remains faithful to God until she meets a novice nun (Daphne Patakia). At that point, she and the film take a 180-degree turn, leading us to believe Benedetta may have been faking her devotion all along. Yes, the sex scenes are graphic, and you would be forgiven if you have thoughts of “The Exorcist” during the movie’s more daring moments. The tone is all over the place and Verhoeven wants you to believe Benadetta is both Joan of Arc and Nomi Malone. The movie turns into a witch hunt, but it’s more like a standard Agatha Christie mystery with eyewitnesses dying and weapons going missing. By not taking a side, the movie is just exploitation without a point. 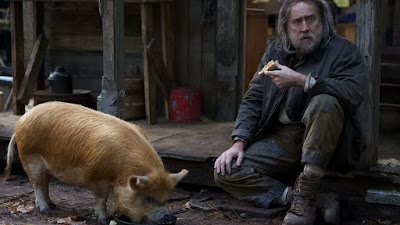 Film: Pig
On Hulu and Streaming

If there was one movie I did not want to see in 2021, it was “Pig.” There are few porcine movies I have embraced (“Babe”), most falling into the “Okja” or “Gunda” meh feeling. I should have known better. Nicholas Cage has made a lot (A LOT) of bad movies in recent years, but peppered in his mass filmography are usually a few standouts, and it has been a very long run of bad Cage vehicles since 2018’s “Mandy” so we were due. And boy, is “Pig” good. What looked like a horror revenge movie in its trailer is actually a thoughtful meditation of the fleeting nature of fame and importance of friends in a hostile world. Although every time Cage’s Rob Feld asked about his kidnapped pig, I kept hearing Judy Parfitt’s Vera Donovan’s voice from “Dolores Claiborne” (“Where’s my PIG!!!”). Feld is a recluse whose only connection to the outside world is a hotshot food supplier, Amir (an excellent Alex Wolff), who buys the truffles the pig finds. So, when the swine-napping happens, Amir is his only resource. Director and screenwriter Michael Sarnoski does a good job with their relationship, which is the heart of the film. Occasionally, Sarnoski changes the tone to something more threatening (what happens at REDACTED, stays at REDACTED), which feels unnecessary and gimmicky. Overall, I admired a lot of “Pig.” 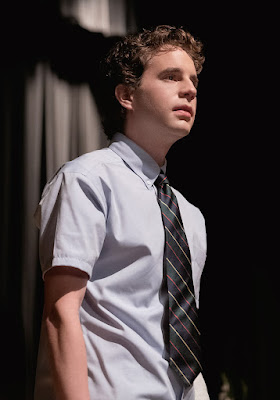 Ok, it’s a little mean of me to put “Dear Evan Hansen” on a list of salacious movie of 2021, but the movie came with such huge nepotism baggage: Ben Platt (his father is the film’s producer) reprising his Tony Award-winning role (even though he has grown out of the part), in a movie musical version that arrived with a big target on its awkward wig. Instead of being sympathetic, Platt’s Evan Hansen comes across as a well-meaning psychopathic man-child who can never seem to tell the truth. I put the blame of this character defect on screenwriter Steven Levenson’s shoulders as I didn’t like the character on stage either. Levenson contrives so many plot coincidences in order for a grieving family to believe that Evan was the secret friend of their son Connor (who recently committed suicide) to make sense. But I am here to defend (sort of) this much maligned movie from 2021. Everyone else in it is doing good work. I especially like Julianne Moore as Evan’s mother and Amandla Stenberg as a do-gooder schoolmate (her part is more sympathetic than the stage version, which makes her big action still sort of unthinkable). The songs by Benj Pasek and Justin Paul were always catchy but there are way too many navel-gazing monologue songs instead of dramatic interaction ones. The problem is that even though Evan is seeing a psychiatrist, we don’t get any indication that he has been professionally diagnosed and might be better off at differently abled school with his extreme case of social anxiety. I wonder if they had just taken Evan out of the plot and concentrated on a school dealing with a student’s suicide, if that would have made a better movie.