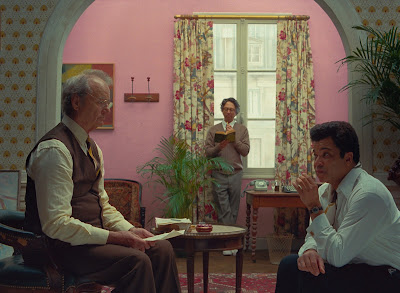 ☆ Film:  The French Dispatch
In Cinemas

Premise: “The French Dispatch” is a supplemental magazine for the readers of the Liberty, Kansas Evening Star, and in 1975, editor Arthur Howitzer runs the magazine as a well-oiled machine, being strict but always bowing to the artistic whims of his writers. Three of these stories are brought to life after a short but engaging bon mot travelogue of the city of Ennui-sur-Blasé, Paris by Herbsaint Sazerac (Owen Wilson). “The Concrete Masterpiece,” written by JKL Berensen (Tilda Swinton) tells the story of a convicted murderer (Benicio del Toro) in an Ennui prison who becomes an artist after finding a muse in prison guard Simone (Léa Seydoux). “Revisions to a Manifesto” by Lucinda Krementz (Frances McDormand) is a portrait of a student (Timothée Chalamet) at the center of the so-called “Chessboard Revolution” protests in Ennui. “The Private Dining Room of the Police Commissioner” is by Roebuck Wright (Jeffrey Wright) and tells the story of a dinner he had with the Ennui police commissioner that ends in a hostage situation.

My Take: It’s going to be hard for me to put into words why this Wes Anderson film is currently my favorite movie of 2021. During my first viewing, I was occasionally confused and frustrated, but more because there’s so much to see in each moment on screen that I knew I was always missing something. But I also knew it would all fall into place after subsequent views. It in no way compares to his best films (“The Royal Tennenbaums,” “The Grand Budapest Hotel”), but just being in the rarefied world of Wes Anderson was enough to keep me engaged by this anthology, which is not my favorite type of film. All the Anderson tropes are here: sets that look like dioramas, a childlike musical score, acting that feels declarative rather than emotive, and his use of bold colors to punctuate his point. There’s a hysterical car chase that’s just the kind of loopy action scene that keeps viewers on their toes. And even though not one moment of the film is set in New York City, it’s no doubt that this is Anderson’s love letter to not only the “New Yorker” magazine, but the city itself. And the feeling is mutual as witnessed by my weekend audience of cinephiles, fragrant curmudgeons, the ladies who lunch and many hipster millennials.

VIP: Jeffrey Wright and Steve Park. There’re not many BIPOC characters of substance in Wes Anderson films (Danny Glover in “The Royal Tenenbaums,” Sara Tanaka in “Rushmore” being the most prominent), but in the last segment, Wright is obviously channeling James Baldwin and does such a good job with the Anderson style, one can’t believe this is his first movie with the director. And as the crucial police chef (not chief, chef), Steve Park’s Nescaffier turns out to be, as Bill Murray’s editor states, the best part of the story. I can’t argue with that.